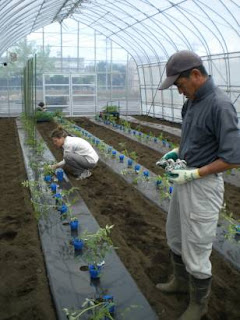 The tomatoes are all in at the farm. The first round of them went in about ten days ago - 200 plants of red and yellow cherry tomatoes as well as a red grape sized variety - and the second round went in last weekend. Another 200 plants, the large variety, all snugly settled for the growing season. This time, though, the planting went forward despite heavy winds and a rainy forecast. The first crop to go in one of the three new greenhouses recently built at the farm, these tomatoes are part of a larger experiment happening on this urban farm.
Greenhouses are nothing new to farming, not even this small family farm here on the west side of the city. We have four others - much, much smaller - used for starting seedlings, processing the harvest in cold or inclement weather, or growing a temperature sensitive crop under protection. These three new ones though, mark a new slightly more industrial direction for the farm. About 15 meters tall, these three possess thermostats that automatically open vents and run fans depending on the indoor and outdoor temperatures. A sprinkler system makes watering a piece of cake. Side doors will let pollinators in and netting (yet to be hung) will keep birds out. 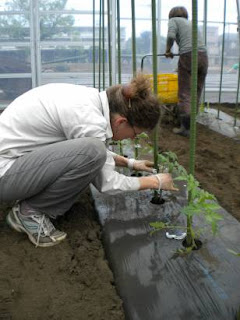 Planting indoors, in some ways, proved similar to planting outdoors. We prepared the soil in essentially the same way about a week ahead of planting. We'll still place basil at the base of each plant, and the plants will still be trained, trimmed, and clamped to their climbing poles. The young seedlings, though, were set in the ground with flowers facing to the center of the rows to make for easy blossom trimming and harvesting as the time comes. If no blossom was visible, it became an exercise in pattern recognition. Tomato plants always grow in the same way - one branch facing the planter, two swung out to the side, and one off to the left just below the blossom crux - so it was a simple matter of finding the pattern and setting it in the ground correctly. (I have a strong suspicion that some of my plants will need to be harvested on the opposite side, but we'll cross that bridge when we get to it.)
Growing in such a controlled environment has obvious advantages: fewer worries about sudden changes in temperature that can slow or hasten growth; sudden influxes of water that can cause the tomato skin to split and subsequently make the fruit unsellable; protection from wind damage; and the ability to extend the growing season on either end. (Word has it we're thinking of planting new seedlings in the fall to harvest well into the off season.)
And there are a few disadvantages. It can be difficult to maneuver the rototiller/tractor (a mini-version of the American variety) in there, and it's going to be really freakin' hot in there in the summer. (Since I'm not a tomato, I'm not so excited about that prospect.) The reliance on electricity (especially in light of summer's coming blackouts) feels a bit sketchy, and I do worry about how the pollinators will flit in and out. I also have my concerns about a contained monoculture, just as I did at Ikumi Tomato Farm, but again I'll cross that bridge when I get to it.