Green Curtain: Variations on a Theme 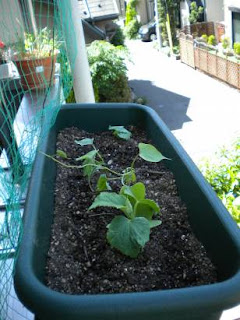 Even before Japan's current energy concerns due to the earthquake, green curtains could be spotted everywhere. Usually constructed from goya (Okinawan bitter gourd), the vines twine their way up netting to provide an extra bit of shade during the summer months. (The most famous of these is the one clamoring over the Suginami Ward Office.)
This year, of course, as a result of the problems at the Daiichi Plant and the closing of Hamaoka for precautionary reasons, the summer may be hotter yet. Word on the street has it that people are advised to set their thermostats at 28-degrees Celsius (82.4 Fahrenheit) if they feel a need to run their air conditioners. Companies and households are asked to strive for a 15-percent drop in overall energy consumption, with large users facing a fine of up to 1 million yen if they fail to comply. 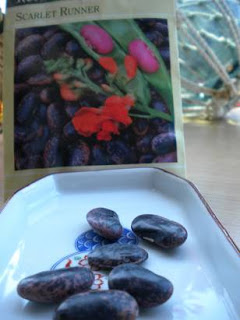 As they have since the March 11th quake, Japan is responding with extraordinary resolve. The university where we teach switched to Cool Biz wear (i.e. short-sleeve shirts with the optional tie) policy a month early. They've also put reflective material on the west facing windows of many of the buildings to keep the interiors a bit cooler. People are talking about purchasing ice pillows (pillows popped in the freezer and then slept on for a cooler night), eating more ice cream (maybe that's just me), and hanging bamboo shades over windows and to protect walls from direct sun exposure. Many of my adult students also mentioned growing a green curtain for the first time ever, too, and I've seen more and more of them going up around the neighborhood.
Our green curtain is also underway, but with a few changes this year. The goya vine is sending tendrils out already, but I mixed in morning glory, cucumber, and on a whim: scarlet runner beans. The last should add some terrific foliage, lovely red flowers, and some tasty beans, to boot. I'm also betting they'll add a nice bit of nitrogen to the pot, which the other plants will appreciate as they season goes along. (FYI, the seeds are still lying in wait in the top photo. Meanwhile, the other plants are working on climbing higher to enjoy their sunny view of the neighborhood.) Since I mix edible and ornamental in the garden it seemed only logical to bring that same philosophy to my balcony garden.
Use plants for shade or energy conservation techniques? If so, do tell! This summer promises to be a hot one, so I'm looking for all the ideas I can find.

Anjuli said…
This is indeed a terrific idea- and I like your additions to your green shade! The morning glories will be a great touch- as will the edibles- In Ghana, we used cucumber and another runner to shade our widows.

Another thing which was common there was to use Bougainvilleas as 'fences' around a property line. Due to their growth being so tight- and the scratchy, thorny nature of the bushes- it is next to impossible to try to get through them...I always thought this was such a clever (and beautiful) idea!
May 22, 2011 at 10:22 PM

Unknown said…
I love the idea of a green curtain! I haven't tried that yet. We get so much direct sun here that its been a battle to cool things down. Shade trees take so long to grow and have their limitations. Thanks!
May 23, 2011 at 1:45 AM

Unknown said…
Also, I forgot to mention. That is why I love grape vines. Some cultivars are better at producing shade than others. Table grape varieties grow high and wine grapes are suppose to be low. I know its hotter here in TX but Black Spanish produce amazing foliage and its all edible.
May 23, 2011 at 1:49 AM

Joan Lambert Bailey said…
Melissa, Grape vines would be a great idea. I've seen them shading second floor balconies here - a vine trained all the way up and then allowed to spread over a netted roof. I've also seen kiwi vines used as a shade shelter, too. If we had a home rather than an apartment, I'd definitely go for one of those.

Alexandra, Thanks! I'm looking forward to seeing their progress, too.

Anjuli, I like the idea of bougainvilleas. Folks here also train roses along archways to help shade parts of their homes. I'm trying to resist another bloom post, but may have to give in shortly. They're just too beautiful!
May 23, 2011 at 7:40 AM

Tammy Ellingson said…
What a great idea! I'm here in Oregon and contemplating how I can incorporate some of your ideas for our house that faces south. Perhaps we should all be looking at ice pillows and moving the thermostat up a bit.
May 23, 2011 at 2:39 PM

Joan Lambert Bailey said…
Thanks, Mama! It's super easy, and often around here perennial vines such as grape and kiwi are also incorporated. Keep me posted on what you decide to do! Seriously, I'd love to know.
May 23, 2011 at 6:40 PM

Kris @ Attainable Sustainable said…
This is a great idea - similar in nature to planting a deciduous vine that shades during the summer and allows light in during the winter.
May 28, 2011 at 9:20 AM

Joan Lambert Bailey said…
Exactly, Kris. It's one of those deceptively simple and beautiful ideas that pays off in a myriad of ways.
May 29, 2011 at 6:02 PM

Milliver's Travels said…
I'm not a gardener but I found this riveting. I can empathize with you, since I live in a house with no AC. We have a blower in the roof that we use to cool down the house, but that's only useful for sleeping, since we need to wait for the cool evening air before turning it on.

I was encouraged to read an article about people using natural methods to save on energy consumption. Sad that it had to be a natural disaster that forced the need for it, but at least this will be one positive result.

OMG, the green curtain on the Suginami Ward Office is incredible!

Joan Lambert Bailey said…
Thanks for stopping by, Milli! We also have a blower/fan sort of thing in our ceiling, but our apartment is on the southeast corner of our building and bakes the day away. We've rigged up some bamboo shades on our front balcony to block some of the heat there, and a second green curtain is underway there, too.

Milliver's Travels said…
I'll bet you wish they would hurry up and grow!